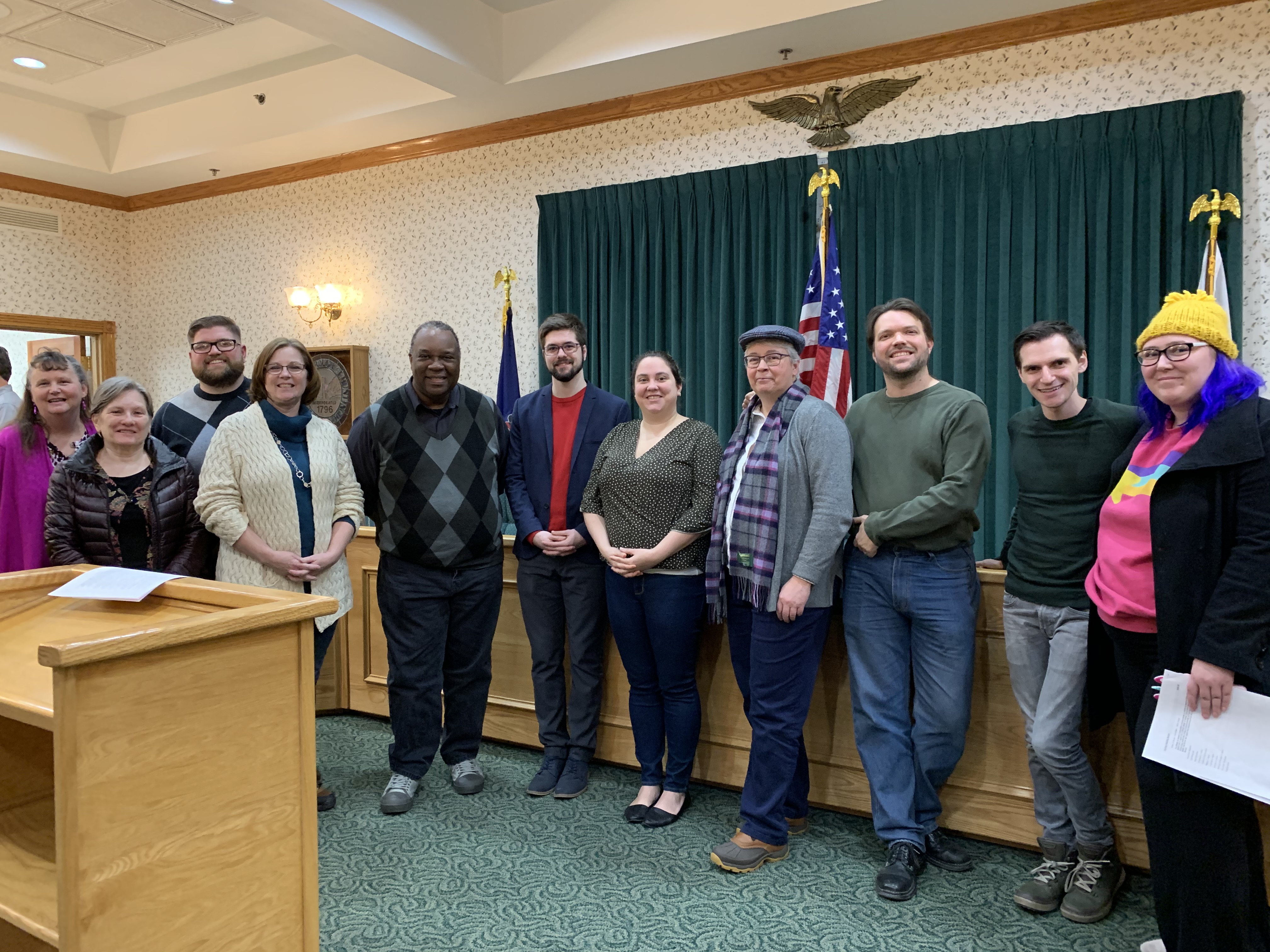 HUNTINGDON, Pa. — The Pennsylvania Youth Congress is thrilled to share that at their December 17, 2019 meeting, Huntingdon Borough Council voted to adopt an LGBT-inclusive nondiscrimination ordinance. Huntingdon becomes the first rural community and 58th municipality in Pennsylvania to enact local protections for LGBT people in employment, housing, and public accommodations.

Huntingdon is located in the heart of Huntingdon County, approximately 30 miles south of the geographic center of Pennsylvania. A borough of nearly 7,000 residents, Huntingdon is the anchor community for their central rural region of the commonwealth. The borough is home to Juniata College, a prestigious small liberal arts college.

Huntingdon resident Anthony Bullett first began advocating for the ordinance nine years ago. He later reached out to the Pennsylvania Youth Congress in 2015 for advocacy support through this process, and the organization has backed the effort since. Bullett, along with Pat Hunter and other community members, formed Diversity Huntingdon to coordinate education and advocacy over several years with Borough Council members. They pressed council for workshop sessions on the issue and spoke out during council meetings in support.

While celebrating the victory last night, Bullett said, “It’s not just what we have done over the past few years, but even looking back 50 years ago, what my father and others tried to do in this town. That we have finally been able to get inclusive nondiscrimination protections into law is tremendous. There will not be another generation that has to live under legal discrimination, at least not in our community of Huntingdon.”

Hunter added, “I am very excited, beyond words. I would not have thought that 22 months ago this ordinance would have passed. We came a long way, and we turned a lot of people’s opinions in the right direction.” This is a personal fight for her as her son is part of the LGBT community. “When my son was in ninth grade, he was the one who told me there were no nondiscrimination protections for him in Huntingdon. He told me he would not stay because there would not be those protections. And he did not stay. Now, maybe it opens the door for individuals who are interested in staying to know they are welcome and protected here.”

Jason Landau Goodman, Executive Director of the Pennsylvania Youth Congress, said “We could not be prouder of the local leaders who advocated consistently over the years to this moment. We have been honored to support them from day one in this effort, and join them in directly advocating with Huntingdon Borough Council to approve this urgently-needed ordinance. It is long overdue for the state to take action. In the meantime, Huntingdon joins other communities in sending the lightning rod to Harrisburg to pass LGBT nondiscrimination protections, and paves the way for additional ordinances in rural Pennsylvania communities to be adopted.”

The Pennsylvania Youth Congress has additionally been working with local leaders directly in several other rural mid-state communities to adopt nondiscrimination ordinances. Borough Councils in Gettysburg and Shippensburg have formally advanced discussions on introducing ordinances in the new year.

The Keystone State persists as the only state in the Northeast that does not have statewide LGBT nondiscrimination protections. While without a state law, Pennsylvania continues to have the most local LGBT nondiscrimination ordinances of any state in the nation. The Pennsylvania Youth Congress is currently leading the coordinated statewide effort to advance LGBT nondiscrimination legislation in the General Assembly. The public support campaign run through the Pennsylvania Youth Congress is called Pennsylvania Values, and has garnered significant statewide support from businesses, chambers of commerce, colleges and universities, community organizations, and faith leaders. State Senator Pat Browne (R-16) introduced the first LGBT nondiscrimination bill this legislative session, SB 224, where it remains in the Senate Labor & Industry Committee for review. Additionally, Sen. Larry Farnese (D-1) has introduced SB 614 and Rep. Dan Frankel (D-23) has introduced HB 1404, where they remain in the Senate Labor & Industry Committee and House State Government Committee respectively.