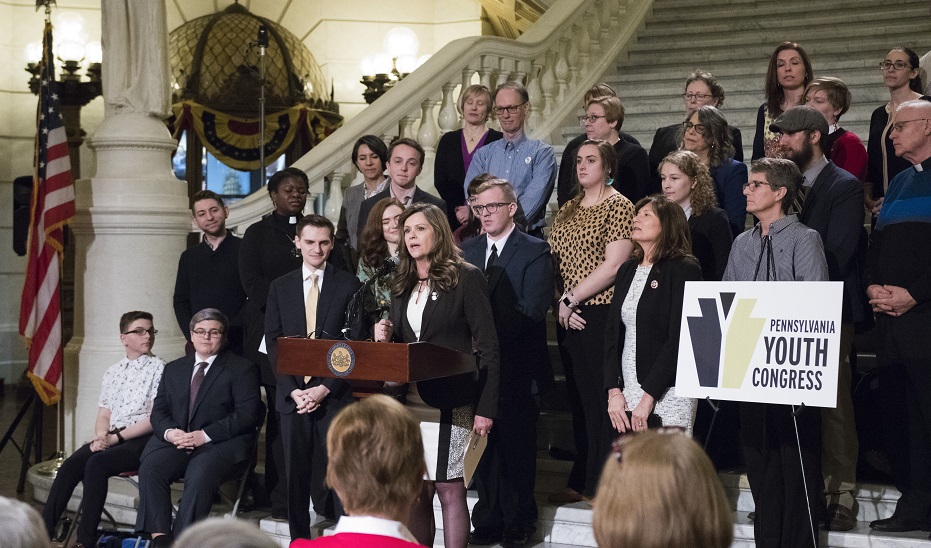 HARRISBURG, PA — Lawmakers, leaders from the faith and business communities, LGBTQ Pennsylvanians, and allies spoke today at a landmark press conference at the state Capitol to
call for LGBTQ nondiscrimination protections in Pennsylvania and across the country. The event was hosted by Pennsylvania Youth Congress to formally launch its campaign, Pennsylvania
Values.

As the legislature begins its work for 2020, Republican State Senator Camera Bartolotta (R-46) pledged support for SB 224, legislation that would prohibit discrimination against LGBTQ
Pennsylvanians. Additionally, as the U.S. Supreme Court deliberates on three LGBTQ discrimination cases—and could issue a ruling this year that could potentially strip away federal
employment protections for LGBTQ Americans—speakers also explained why statewide and federal legislation is urgently needed to ensure LGBTQ Americans are able to live and work
without fear of discrimination or harassment, and that they’re formally protected by state and federal law.

“As Chair of the Senate Labor and Industry Committee, I take very seriously the need to have the best workforce possible to grow our economy and create opportunities. Every person should
have unfettered access to opportunities. Leaving qualified individuals on the sidelines because of their identity fails Pennsylvania,” said Sen. Bartolotta. “I look forward to getting this legislation
through the Senate, to the House and on to the [governor’s] desk. It’s about time.”

Speakers at the event included:

“We are 20 years into the 21st century. We cannot continue to allow our fellow Pennsylvanians to be treated like second-class citizens for their gender identity or their sexual orientation. This
bill needs to pass now,” said Rep. Thomas.

“The reality and fear of discrimination affects LGBT Pennsylvanians every single day. Passing this bill is the right thing to do for our state, and ultimately our country. We have the power today in Pennsylvania to fix this and save lives,” said Goodman.

As the coordinated effort backing LGBTQ nondiscrimination legislation in the General Assembly, Pennsylvania Values has secured unprecedented support. Speakers shared the fact that there is overwhelming support for this legislation from major state businesses such as Alcoa, Hershey and Giant Eagle, more than 30 regional chambers of commerce, over three dozen colleges and universities (including the University of Pittsburgh, Penn State University and the University of Pennsylvania), numerous faith leaders, and leading statewide civic organizations (including the Pennsylvania Coalition Against Rape, the NAACP of Pennsylvania and the Anti-Defamation League).

“Legislators, today I am here asking for your support as a Pennsylvanian, an LGBTQ individual, and as someone representing part of the business community in Northeastern Pennsylvania on SB 224. We have to be an area that shows we are welcoming to all Pennsylvanians, future and current, to live, work and play,” said Eaton of the Greater Wilkes-Barre Chamber of Commerce.

“I love my home state. But I’m certain that I’d love it even more if protection against discrimination was guaranteed for the more than 400,000 members of the LGBTQ community living in Pennsylvania, myself included. I wait, eagerly and hopefully, for the day that this is the case,” said Nealon.

“Discrimination based on my sexual orientation almost left me without a place to live. This situation should not have legally been allowed to happen,” said Bugbee, a student at
Shippensburg University. “Our lawmakers here in Pennsylvania and the Justices on the Supreme Court need to take action to make sure what happened to me doesn’t happen to
anyone again.”

“As an Afro-Latina of the trans experience, I have experienced rampant discrimination,” said Mahogany Rios, Pennsylvania Youth Congress Ambassador from Pittsburgh. “Many of us suffer from extreme poverty, racism and transphobia within our communities. Statewide LGBT nondiscrimination protections will not only dramatically improve the lives of countless young transgender people of color like me in Pennsylvania, but will save our lives.”

At the press conference, Bishop Park shared a letter in support of LGBTQ nondiscrimination protections signed by all the Methodist Bishops of Pennsylvania. Additional letters signed by all the Episcopal Bishops and Lutheran Bishops of Pennsylvania were presented in support of the legislation: “We call upon our lawmakers to recognize the unjust suffering experienced by our LGBTQIA+ citizens when they are marginalized and dehumanized, and ask them to act to protect them from harm by passing this bill. It is long overdue and greatly needed at this time, which is filled with polarization and violence.”

More information about the statewide movement for LGBTQ nondiscrimination protections and its supporters can be found online with Pennsylvania Values at https://pavalues.org or on the Pennsylvania Youth Congress website. A recording of the event can be found at https://www.facebook.com/payouthcongress/.