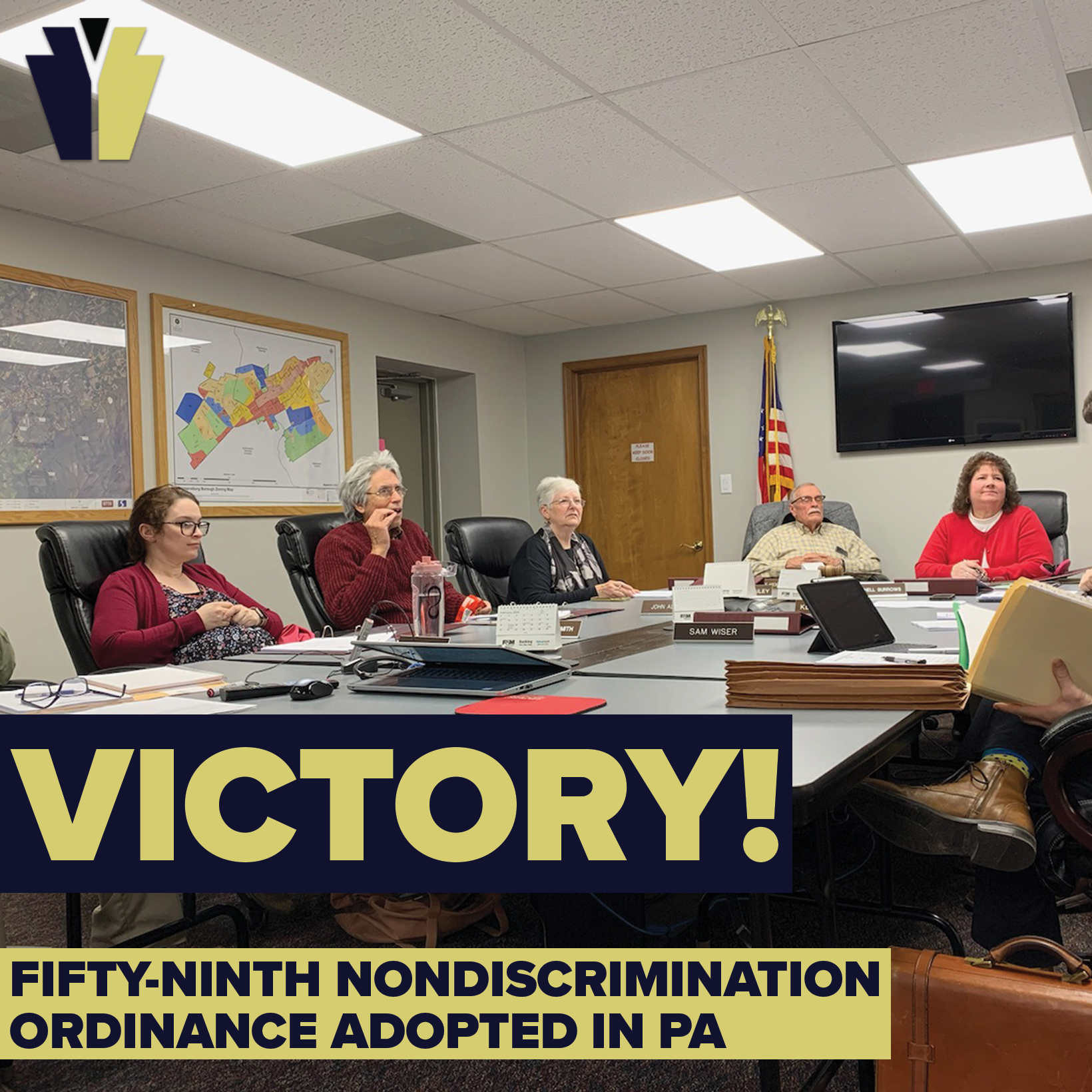 Shippensburg is located in south central Pennsylvania, straddling Franklin and Cumberland Counties. The oldest settled community by colonists west of the Susquehanna River, Shippensburg is approximately 45 miles southwest of Harrisburg and 25 miles north of the Maryland border. A borough of around 5,500 residents, Shippensburg is the anchor community for a largely rural region of the commonwealth. The borough is home to Shippensburg University of Pennsylvania, a public university within the Pennsylvania State System of Higher Education (PAASHE). Huntingdon became the first small town in Pennsylvania to adopt an LGBT-inclusive nondiscrimination ordinance in December 2019.

Shippensburg resident Michael Bugbee experienced housing discrimination in August 2019. He was repeatedly denied housing by prospective landlords upon discovering he was going to live with his husband. Ultimately after securing housing when he did not disclose his sexual orientation, a landlord told him he was to be evicted.

Upon reaching out to the Pennsylvania Youth Congress, Michael worked with the organization to advocate together for Shippensburg Borough Council to adopt a local nondiscrimination ordinance. They pressed council during their meetings over months during public comment both in-person and over Zoom to introduce and adopt the ordinance. The Pennsylvania Human Relation Commission’s Executive Director Chad Lassiter sent the borough council a strong letter of support, which was delivered in-person during a council meeting in early March 2020 by the late Reed Reynolds of the PHRC.

“Discrimination based on my sexual orientation almost left me without a place to live. This situation should not have legally been allowed to happen,” said Bugbee, also a student at Shippensburg University. “Shippensburg Borough Council has now taken the necessary action to make sure what happened to me doesn’t happen to anyone again in our town.”

While several Shippensburg University professors have spoken publicly advocating for the ordinance, the university administration has yet to release any official statement supporting LGBT nondiscrimination protections.

In his prepared remarks during the meeting, Council President Hockersmith said, “It is the intention of this ordinance that all individuals be treated fairly and equally…the saying ‘it takes all kinds’ tells us that regardless of the personality we should be able to accept everyone for who they are, and deal with everyone without discrimination.”

“I think we need to make a statement that we are indeed a welcoming community. A community where people can expect that citizens will indeed be kind to them,” said Council member Sandy Mailey.

Jason Landau Goodman, Executive Director of the Pennsylvania Youth Congress, said “We are extremely proud of Shippensburg Borough Council for taking clear action to protect LGBT individuals in their community from discrimination. We have appreciated the opportunity to support them from day one in the effort to adopt this vital ordinance. It is long overdue for the state to take action. In the meantime, Shippensburg joins other communities in sending a lightning rod to Harrisburg to pass comprehensive LGBT nondiscrimination protections, and paves the way for additional ordinances in small town Pennsylvania to be adopted.”

The Bostock decision by the US Supreme Court in June 2020 was a landmark decision that is expected to read sexual orientation and gender identity into additional nondiscrimination laws. However, at this time, the decision only impacts Title VII of the Civil Rights Act of 1964 regarding federal employment protections. The ordinance in Shippensburg will grant immediate and explicit protections to LGBT individuals not only in employment, but for housing and public accommodations as well.