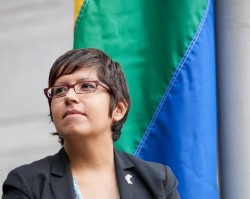 Gloria Casarez was a pioneering activist in Philadelphia who fought relentlessly for social, racial, gender, and economic justice. For decades she advocated for affordable housing, healthcare services, LGBTQ inclusion, to end homelessness, and more. Generations of LGBTQ Philadelphians are better because of her leadership. Our activism work at the Pennsylvania Youth Congress has been deeply influenced by Gloria as we continue to try, as best we can, to follow her legacy. She passed away six years ago this month from breast cancer at age 42.

Following Gloria’s passing, a loving and mournful Philadelphia came together to honor her with a mural in the heart of the Gayborhood, on 12th Street. Her late mother, family, her widow Tricia Dressel, and the former Mayor of Philadelphia Michael Nutter were among many who participated in painting the mural. The mural has been a powerful community marker for over five years. 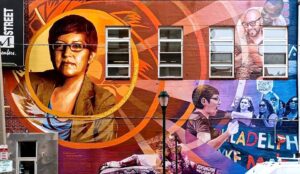 In the continuing wave of gentrification, an issue Gloria fought passionately to halt, the building where the mural is bound to was bought by a New York developer that has slated it for demolition.

It is an outrage that a developer would come into the heart of our community to destroy this mural to Gloria, which is the only public monument to an out LGBTQ woman of color in Pennsylvania.

The Pennsylvania Youth Congress fully endorses the movements to stop the mural of Gloria Casarez from being demolished. We have sent our own letter to Midwood expressing our total opposition to their destroying this important mural to Gloria.

The campaign #KeepGloriaon12th was launched in September 2020 to coordinate community efforts to defend the mural. On Monday, October 19th, 2020, a vigil was held on Gloria’s death anniversary in front of the mural. This effort has been featured in the Philadelphia Inquirer here and the Philadelphia Gay News here. One of Gloria’s dearest friends Erme Maula penned this powerful op-ed in the Philadelphia Inquirer here on why the mural is irreplaceable and must be saved. The #KeepGloriaon12th movement has a Facebook page here and Instagram profile here.

#KeepGloriaon12th has three demands, in order of priority:

The main call to action is to sign the petition below.

You can also email your support of keeping the mural to Midwood directly, as well as the following public officials and civic leaders: 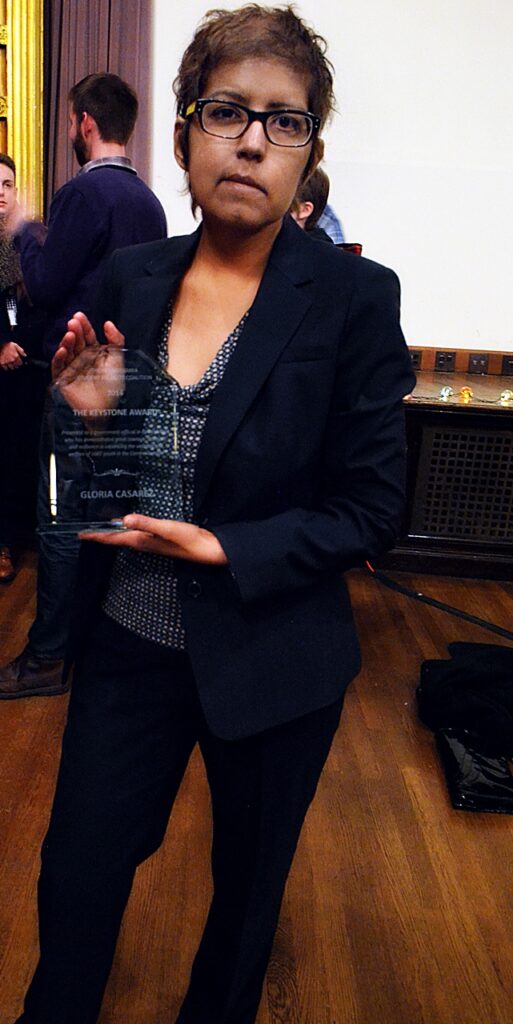 At our annual Youth Action Conference, the Pennsylvania Youth Congress presented Gloria with the Keystone Award at the 2014 gathering. This honor is given at each YAC to a public official who has worked intently to advance the welfare of LGBTQ youth in Pennsylvania communities.

Moments before the award presentation, we were informed that Jaci Adams, a longtime leader in the Philadelphia trans community, had passed away from her own long battle with cancer. Gloria and Jaci were close. In beginning the award banquet dinner, attendees were talking about Jaci’s impact on the city.

A PYC leader saw her tearful over Jaci and gave her a hug, saying, “I’m so sorry for your loss.” Gloria responded in sharing that “it’s not my loss, it’s a loss for the community.”

Gloria’s passing has also been a tremendous loss for us all. We must continue to celebrate Gloria’s legacy by pressing on toward justice with the passion, strategy, selflessness, integrity, and power that she demonstrated is possible.

Her mural should be saved.

Here are her transcribed remarks from the 2014 Youth Action Conference hosted by the Pennsylvania Youth Congress:

I am recovering from laryngitis right now so my voice sounds a little funny.

I was going to make my partner, the love of my life, read my prepared remarks, and I would just stand here and nod, but I did not get to prepare any remarks, because we got the news about Jaci.

It’s truly devastating. Jaci was a personal friend, professional advisor, and this loss leaves a big void. I think Jason spoke to that well, and I think that this truly, truly is a big loss for our community.

So as I was sitting here I jotted a couple things down, but I really want to dedicate tonight to honor to Jaci. Jaci was someone who, in an official capacity, as an official representative of the city of Philadelphia, worked on policy issues.

She was one of the people who we tapped when we were looking to make policy changes. She was also one of those people who knocked on our door who said “you need to make this policy change.” She had a direct hand in the shelter policy change that was made several years back, and more recently in behavioral health and intellectual disability policy change.

She was one of the people who called for the Morris Home, which is a transitional housing program, the first of its kind in the country. She was a leader in HIV and AIDS; she worked in the HIV/AIDS field for many years, and also in trans* health issues as you heard.

She literally helped train thousands of police officers in the city around how to interact with members of our community. I did those trainings with her, and she was never one to mince words. She told them how they needed to hear it.

She wasn’t exactly professional in these professional trainings, but it’s what those police officers needed to hear if they were ever going to interact with real people in real situations.

Jaci was somebody who did all of this really on her own time, and she was somebody who wasn’t thanked enough. So I want to extend very humbly today my appreciation to her and really to say thank you, Jaci, for everything you have done. She really helped make Philadelphia the great place that it is today.

I want to remind us all where we are. According to the Human Rights Campaign, Philadelphia is the greatest place to be LGBT. We are the number one ranked city in America in the most recent municipal equality index, which is an index, a ranking really, of nearly 300 cities on law and policy. So it’s not like a lot of these other rankings that are like, it’s the best yogurt in the world. It really, literally looks at all our laws and policies, what we are doing, and what we say we believe; and Philadelphia is number one.

We share that with Seattle, but, we’re number one.

I came to doing community work through what I think was probably one of the hardest times, in HIV and AIDS, when women’s reproductive health issues were going on at the same time, and it’s really awesome to be doing this work at a time that is just so full of potential. So I want to encourage you to continue to fight, continue to push, and continue to help make your communities, as best as they can be. Even with these designations and the positive things we are doing here in Philadelphia, we’re not there yet; we still have a lot to do.

We have had these policies on the books since 1982. We [then] officially added sexual orientation as a protected status and that’s 32 years ago. It took us another 20 years before we added gender identity protections to that same law. Now I say that knowing very clearly that we are in Pennsylvania, where neither are protected, right? So all of our efforts need to go towards ensuring that Pennsylvania can be what Philadelphia was 30 years ago. Twelve years ago. So these things are all very important to the lives of people who live around the state, around the country.

Just in the time that I’ve worked for government, which has been since 2008, when Mayor Nutter came on, we’ve had the chance to work on some really great things. The mayor has been completely supportive of anything we wanted to do. Kathy, who is one of the other honorees, was one of the very first people I met with back when I started the job. One of the things she talked about was trans* inclusive health benefits, and the need for these things. And you know, government moves really slow, and so really, it takes four years before there is collective consciousness and a council member is willing to stand up and say, “Hey, let’s do this.”

But, you know, we did that. I want to acknowledge Councilman Goy—how about that, Councilman Goy, promotion? Chris Goy, who works in Councilman Kenney’s office, who was a point person for us, and really helped steer that bill.

In addition to all of that, and our mandate, really, everyone needs to be at the table.

I’ll say one more thing about the Mayor and then I’m going to wrap it up. The Mayor is a longtime supporter of all these issues, he’s part of the national coalition of mayors, that he is the chairperson of, that is working on marriage equality issues, that is obviously something that has earned his significant support. He is also working and doing anything he can do to advance non-discrimination bills that will come through the state legislature, that’s an issue that is very important to the mayor, personally.

Just one final thing, you know, I did a lot of trainings with Jaci and one of the things that—she didn’t mince words. One of the things she would say frequently, we trained cadets, so they were rookie cops, these were going to be cops that would be thrown out on the streets first, not the ones that were going to be sitting in a police office, and she felt very strongly that people needed to hear it real. And so she would say “You see me, and you might see me as a bitch, but I’m a bitch for justice, so if you’re gonna call me a bitch, call me a bitch—for justice.” And that very much was how Jaci was, so I encourage you all to do the same. Be smart and unwavering, and keep your focus.

PYC Statement on the Insurrection in the US Capitol
January 7, 2021