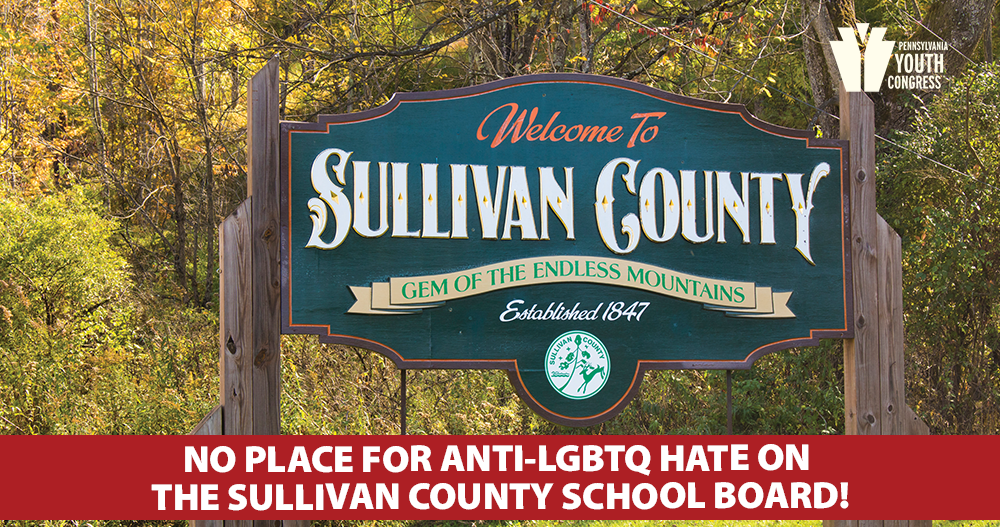 LAPORTE, Pa. — During a Sullivan County School District meeting on Tuesday, November 10, 2020, school board member Timothy Nitcznski called for the removal of a display featuring LGBTQ pride flags defining LGBTQ terms in the high school library. Mr. Nitcznski claimed “I think it’s wrong. I think it needs to be taken down, at the minimum, right now.” On LGBTQ inclusion being “crammed down his throat” he continued, “if you’re going down that road, suppose if I feel that we should have a KKK month, or I feel that we should have a white supremacist month…It’s a slippery slope.”

Community members and alumni were quick to express outrage to these appalling comments and support for LGBTQ students and neighbors. A petition created by an alum calling for Mr. Nitczinski’s resignation has gained nearly 1,000 signatures as of today.

PYC has sent a letter to the school board echoing the people of Sullivan County in demanding the resignation of Mr. Nitczinski. The letter asks the board to join that demand in calling for his resignation through formally censuring him, requiring meaningful inclusion training throughout the school district staff and administration, and updating their nondiscrimination policies to include gender identity or expression. The next Sullivan County School District board meeting is this evening, November 17, 2020.

Equating innocent LGBTQ schoolchildren to members of the KKK, a group dedicated to violence, murder, and white supremacy, was an irresponsible and callous act of cruelty. LGBTQ students do not deserve to be regarded with contempt reserved for killers, and students of color in the district do not deserve to have groups that have terrorized their communities so casually weaponized, especially by a public official who holds power over them.

Mr. Nitczinski’s bizarre commentary was not only hurtful but it was completely absurd. The fact that LGBTQ children exist is not contingent on the harm of another group. Gender and sexual orientation are immutable traits. Terrorism and bigotry are not.

Superintendent Patti Cross and Board President Kimberly Phillips were quick to condemn the incendiary comments and assured the community that they are dedicated to providing a safe and inclusive learning environment for students. Board President Phillips told Fox 56 viewers, “I do not personally, or as a board member, approve of any of those statements…Our district supports a safe and healthy environment for all our students regardless of their sexuality or their race or religion.” Both women then released an official statement, including a proposal for sensitivity and diversity training for board members.

The Pennsylvania Youth Congress applauds the swift condemnation by Superintendent Patti Cross and Board President Kimberly Phillips of the heinous comments made during the board meeting, and wholeheartedly supports requiring inclusion trainings for school board members, administration, and staff. However, more must be done. Continuing business as usual with Mr. Nitcznski remaining in a position of power over LGBTQ students and the students of color would have a chilling effect and completely disregard their well-being. Mr. Nitczinski must resign.

PYC Letter to the Sullivan County School Board

PYC Statement on the Insurrection in the US Capitol
January 7, 2021