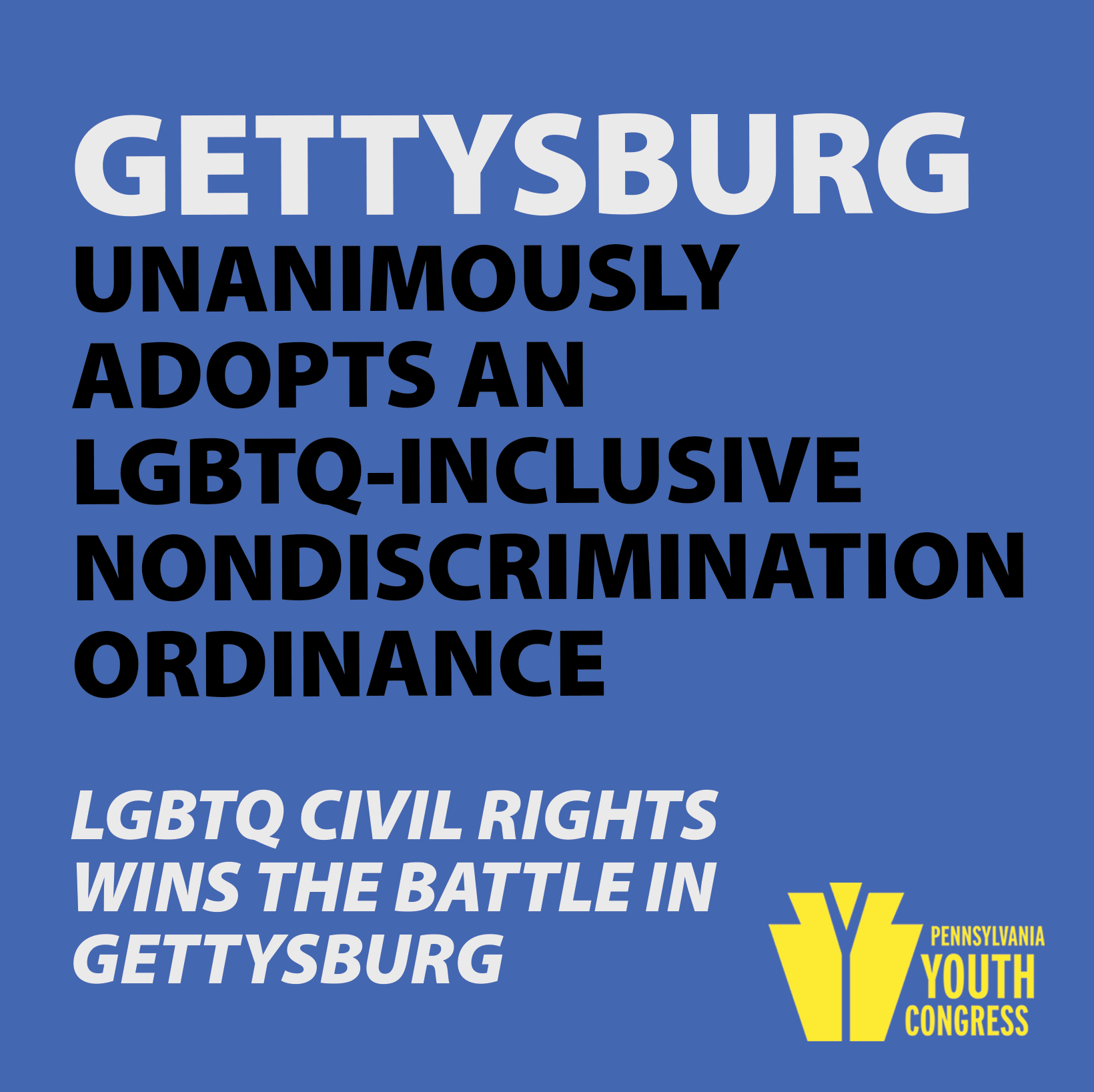 GETTYSBURG, Pa. — The Pennsylvania Youth Congress is thrilled to share that at their December 14, 2020 meeting, Gettysburg Borough Council unanimously voted to adopt an LGBTQ-inclusive nondiscrimination ordinance. Gettysburg becomes the fourth small town PA community and at least the 64th municipality in Pennsylvania to enact local protections for LGBT people in employment, housing, and public accommodations.

Gettysburg is in the heart of Adams County in south central Pennsylvania. The borough is recognized across the nation as the location of the battle that turned the tide in the American Civil War, and where President Abraham Lincoln delivered his Gettysburg Address. Gettysburg is located approximately 40 miles southwest of Harrisburg and less than 10 miles north of the Maryland border. A borough of over 7,500 residents, Gettysburg is the anchor community for their central rural region of the commonwealth, also known as the Fruit Belt. The borough is home to Gettysburg College, a prestigious private liberal arts college.

Gettysburg resident Chad-Alan Carr reached out to the Pennsylvania Youth Congress in early 2019 to propose working together on the ordinance. As a local LGBTQ community leader, having founded Gettysburg Pride in 2016, Chad-Alan worked with PYC to advocate together for Gettysburg Borough Council to adopt a local nondiscrimination ordinance. They pressed council during their meetings for over a year during public comment both in-person and over Zoom to have the ordinance introduced and ultimately adopted. PYC’s Executive Director Jason Landau Goodman gave his first formal presentation to Gettysburg Borough Council during their meeting in September 2019, and regularly attended their borough council meetings as well since.
At tonight’s meeting, Chad-Alan Carr, who is also the Founding Executive and Artistic Director of Gettysburg Theater, said “[We] again appreciate very much [Borough Council] taking this proposed ordinance seriously. We thank you for your diligence and hard work.”

Carr and PYC helped many citizens come out to speak in favor of the ordinance since it was first brought up for a discussion in 2019.

Jason Landau Goodman, Executive Director of the Pennsylvania Youth Congress, said “Let this vote be a lightning rod to Harrisburg that they must take action on LGBTQ nondiscrimination legislation. When communities including Gettysburg are stepping up, it’s beyond time for our General Assembly to do the same.” Further, he added, “We are extremely proud of Gettysburg Borough Council for taking decisive action to protect LGBTQ individuals in their community from discrimination. We have appreciated the opportunity to work with them since this proposal was conceived through this evening upon passage. We will continue to support local communities adopting these protections until our General Assembly addresses this urgent issue of protecting vulnerable LGBTQ Pennsylvanians.”

In reflecting on the ordinance’s passage this evening, Council member Lawson said “It has been over a year in the making, but I am so proud to be part of this council that unanimously voted to approve the nondiscrimination ordinance that will provide protection for all our citizens in the Borough of Gettysburg.”

During the meeting, Council member Moon said “We did something really important here tonight…I’m really proud of you all.”

The Pennsylvania Youth Congress has additionally been working with local leaders directly in several other mid-state communities to adopt nondiscrimination ordinances. One year ago this week, Huntingdon became the first rural, small town community in Pennsylvania to adopt an LGBTQ-inclusive nondiscrimination ordinance. They were followed this year by Shippensburg, Bloomsburg, and now Gettysburg.

The Bostock decision by the US Supreme Court in June 2020 was a landmark decision that is expected to read sexual orientation and gender identity into additional nondiscrimination laws. However, at this time, the decision only impacts Title VII of the Civil Rights Act of 1964 regarding federal employment protections. The ordinance in Gettysburg will grant immediate and explicit protections to LGBTQ individuals not only in employment, but for housing and public accommodations as well.

Gettysburg was a frequently used backdrop during the 2020 Presidential election. Tonight, LGBTQ civil rights was the battle that was won here.

The Pennsylvania Youth Congress is currently leading the coordinated statewide effort to advance LGBT nondiscrimination legislation in the General Assembly. The public support campaign run through the Pennsylvania Youth Congress is called Pennsylvania Values, and has garnered significant statewide support from businesses, chambers of commerce, colleges and universities, community organizations, and faith leaders. The Adams County Chamber of Commerce and Gettysburg College are among its supporters. Nondiscrimination legislation is expected to be introduced in both the state House and Senate quickly when the legislature returns to session next year.