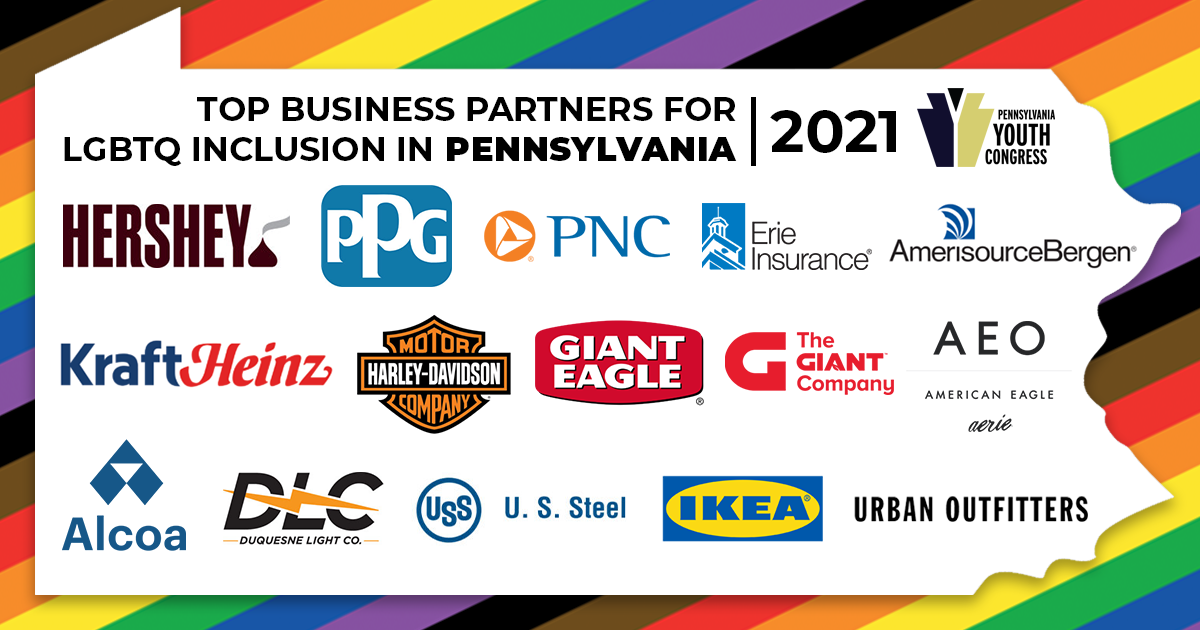 HARRISBURG, Pa. — This Pride Month the Pennsylvania Youth Congress is sharing heartfelt appreciation to the major Pennsylvania businesses that fully endorse LGBTQ inclusion, as well as encouraging public pressure on purported corporate “allies” to come forward to finally do the same.

Support for basic LGBTQ-inclusive nondiscrimination protections in Pennsylvania is more widespread than ever before. Businesses and civic leaders that stand in solidarity with LGBTQ people when it matters most are to be commended. We celebrate the hundreds of stakeholders which have proudly come forward to do so.

Over two years ago, the Pennsylvania Youth Congress launched the Pennsylvania Values campaign, coordinating the significant public support for LGBTQ nondiscrimination protections to place pressure on the General Assembly to finally take action. Major Fortune 500 companies, over 30 regional chambers of commerce, and nearly 50 colleges and universities have rallied behind the largest-ever movement for nondiscrimination legislation in PA. We heartily celebrate fifteen of our strongest business allies, who have actively supported the work of ensuring civil rights for LGBTQ+ Pennsylvanians in our first-ever Pride Power list issued today. To these companies, we say: Thank you for standing with us in securing equal rights in Pennsylvania. 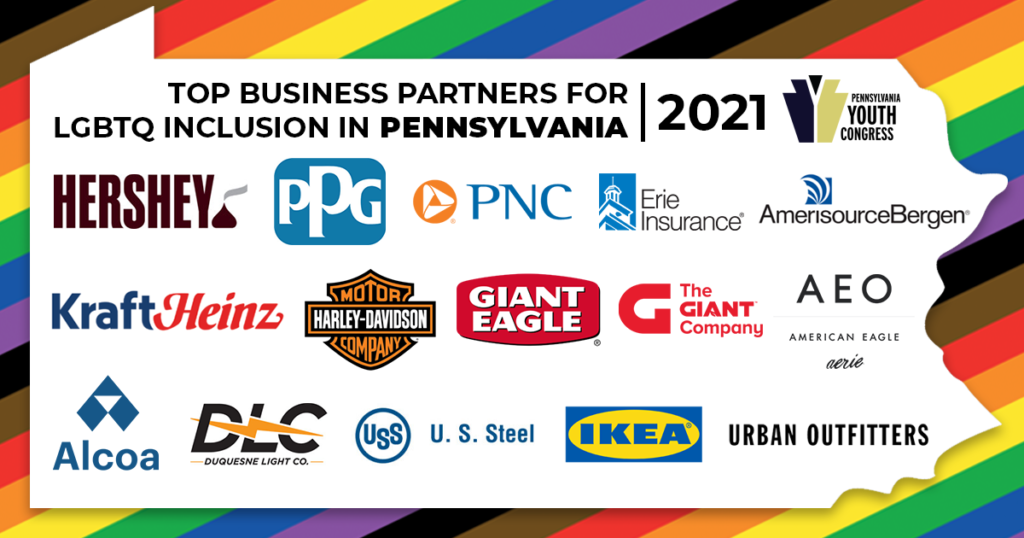 However, corporations and leaders that use LGBTQ people as marketing props through rainbow-themed marketing campaigns or press events, without taking any meaningful action to fight for us or use their political capital to address the urgent issues of our time, will no longer have our support. There are many large businesses operating in Pennsylvania that claim to support LGBTQ inclusion yet have refused to support, or chosen to remain silent on, the civil rights of LGBTQ people. In the era of public accountability, especially on issues impacting marginalized populations whose lives are on the line, the Pennsylvania Youth Congress says: Enough.

Several companies operating in Pennsylvania have made the decision to adorn their social media in rainbows or invest thousands of dollars in colorful seasonal apparel, yet decline to publicly back the most basic of civil rights for LGBTQ people. These companies want credit for supporting LGBTQ people and the money of those who support us, without doing the work. Many of them think if they throw up a Pride flag, they never have to use their political, social, and financial capital to actually stand with LGBTQ people.

The Pennsylvania Youth Congress believes this double-speak is regressive, insulting, and exploiting vulnerable people. How can companies claim to be LGBTQ allies, when they are refusing to publicly state that LGBTQ people should be treated with dignity and respect under the law? 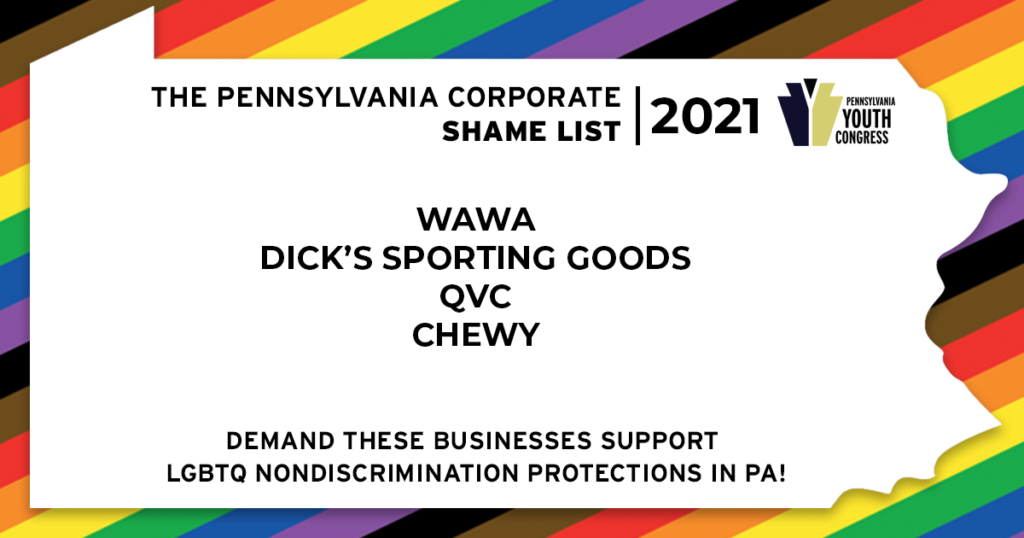 We issue this press statement to appeal to these companies to do the right thing: sign up as supporters of LGBTQ nondiscrimination protections in Pennsylvania at pavalues.org. The Pennsylvania Youth Congress would enthusiastically celebrate their decision.

Until the time comes that these companies affirmatively state public support for LGBTQ nondiscrimination protections in the General Assembly and direct their government relations team to join the large-scale effort pressing for these basic protections, the Pennsylvania Youth Congress will promote with dozens of LGBTQ organizations statewide for the following actions be taken starting on July 1st:

It is not easy to expose the pitfalls of corporations that spend untold sums of money on spinning their public image. We know by publicizing their names here, their communications staff will likely recommend they do not sign onto a list of supporters run through an organization calling this attention to them. However, the mainstream conversation as covered in major national LGBTQ media outlets in 2021 has highlighted the hollowness of some corporate support for LGBTQ inclusion. Exposing the state of affairs in Pennsylvania on this issue is both timely and necessary.

The need is urgent for the Pennsylvania General Assembly to adopt LGBTQ nondiscrimination protections in housing, employment, and public accommodations. We are closer than ever, but we can only get there when we have more than overwhelming evidence of public support. It must be unequivocal and from all major stakeholders. While it may be uncomfortable to call out these companies, we must continue the tradition of being direct when the lives of our most vulnerable are in the balance. We cannot afford to have any more holdouts, especially from “allies”. Either these companies are with LGBTQ people and want true patrons, or they are treating us as props. Enough.

Pride Month commemorates the Stonewall rebellion, which was a series of riots ignited by those who were most pushed to the margins. Trans people — particularly trans women of color — as well as young people, drag queens, sex workers, and low-income folks were at the heart of them. Pride is still our uprising.

The movements for LGBTQ inclusion are certainly advancing. Even ten years ago it might not have been thought possible that dozens of the largest corporate stakeholders in Pennsylvania would be rallying this strongly for LGBTQ nondiscrimination protections. This legislation will one day become law, because of the power of our business, faith, educational, and local communities.

UPDATE 7/8/2021: This post has been updated to reflect that Lincoln Financial has signed onto the Pennsylvania Values Business + Employer Pledge, and PYC has begun conversations with Aramark. They have been removed from the listing of companies that have not yet stated public support for LGBTQ nondiscrimination protections in Pennsylvania.

UPDATE 7/15/2021: Aramark has now signed onto the Pennsylvania Values Business + Employer Pledge, and PYC has begun initial conversations with Chewy.