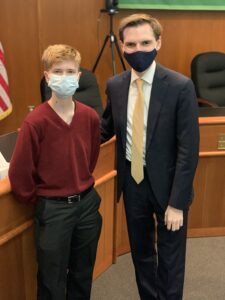 Today the Senate Majority Policy Committee held a hearing in Chester County on hate crimes protections. Senator Tom Killion (R-9) requested the hearing in his district, with Senate Majority Policy Committee Chair Senator Dave Argall (R-29) presiding. This was the first time LGBTQ advocates have been formally invited to address either Republican policy committees in the state Senate or the House of Representatives. Our Executive Director Jason Landau Goodman was among the invited advocates who testified. PYC State Policy Associate Preston Heldibridle was also in attendance.

The four legislative policy committees of the Pennsylvania General Assembly (Senate Majority (Republican), House Majority (Republican), Senate Democratic, and House Democratic) have no voting power, but have the purpose of convening hearings to draw attention to pressing issues their caucuses would like to have information on the record about. They are often used as pretext for action the caucus is considering advocating for.

Pennsylvania was among the first states to add LGBT protections in its hate crimes statute, in 2002, but it was unfortunately struck down due to a legislative technicality in 2008 and has yet to be restored. Only once since 2008 has an LGBT-inclusive hate crimes bill been released from a legislative committee. In 2014, former state Representative Ron Marsico (R-105), as Chair of the House Judiciary Committee, called up former state Representative Brendan Boyle’s (D-170) HB 177. It passed the committee in a 19-4 vote, with the lone legislator still in office who voted in opposition to the bill being now-House Speaker Bryan Cutler. 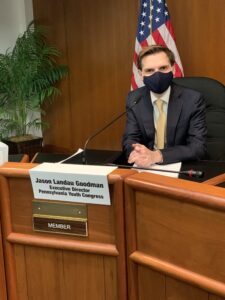 Kendall Stephens, a Black trans woman from Philadelphia, was brutally attacked in August 2020. She testified to share her story, which deeply moved members of the committee.

The hearing was productive in showcasing additional support on the record for LGBT inclusion.

It is absolutely past time for action on hate crimes and nondiscrimination protections. A hearing is by no means enough, it is only the start.

Here is the link to the Senate Majority Policy Committee webpage on the hearing, which includes the names and affiliation of those who testified, and the full hearing video (which is also embedded on this post).

Below are videos of the opening remarks from our Executive Director Jason Landau Goodman, Kendall Stephens, and the full hearing in its entirety.

Following the videos is the full written testimony of our Executive Director.